Hey Guys, it’s Grizzle again reporting back on our day care adventures and today was a lot of fun.

We set off first thing to pick up my pals, it was raining and usually this means I stay holed up in bed as I really do hate getting wet! But mom said I had work to do so after sighing a bit I put my gear on and off we went. Our first stop was Woburn Sands because I was kicking up a fuss in the van because it was poo’oclock (when will she learn!). After doing our business and peeing on every leaf in sight we kept driving to Aspley Guise because apparently it’s easier to park here, I don’t know anything about this technical stuff but it’s what I hear….

We usually start our walk near the church (MK17 8HN is the post code of the church if you’re interested in doing the same walk as us) because there are nice little spots to park, and if you keep on that side of the road you can just follow the public footpath which has been nicely marked out for you. We love walking here as not many people know about it so it’s usually just us. I had to stay on my lead for some of the walk because I spotted myself a deer early on and felt that the world wasn’t safe until I caught him. Lucky for mom – but unlucky for me – she read my mind and quickly secured me. What a shame, I came SO close to getting across to that cheeky deer, can you see how it just stares back at us? 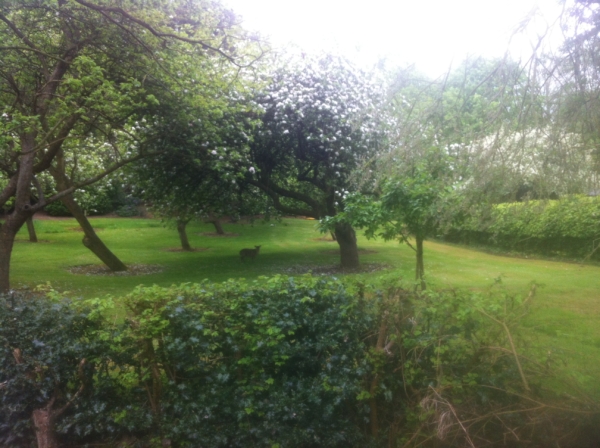 Anyways, after that we was hyped up: there was lots of rabbit poo to eat and smells galore as it had been raining. And that’s not all! We also watched some trees being cut down, massive massive branches were being thrown in the road and we had to stand still for absolutely ages waiting for them to let us cross. Sometimes I don’t think people remember we are dogs and have exploring to do.

We were pretty wet by this point so mom packed us back in the van and brought just me and my pal Freddy to Boycie’s house. Apparently he was a bit scared to go out last week but he didn’t seem shy today. In fact, I couldn’t get him away from me, he kept following me around and smelling my bottom – I hadn’t eaten any tripe or raw egg today either so it couldn’t have been that :/

He showed us his favourite local walk in Brogborough and this place is even BETTER than Aspley Guise and the woods over there. Brogborough is only tiny with 150 houses and the area feels really remote. We took a left behind the Community Hall and just followed the path; you can go a few different ways actually but we just followed little Boycie because he seemed to know where he was going. There are just endless fields to walk through and explore, along with an old ruin right in the middle of them. There are little signs with arrows but I think it would be easy to get lost here, we walked for about 40 minutes before turning around and sure enough it took us ages to get home as we didn’t really know where we were going. Mom said we’re going back there later in the week as it was hard to take good pictures because it was raining so much.

We then all took a really long nap together on the couch because we were tired, cold and wet. And now it’s late, I can’t really remember what happened after that, oh Henry came over to see if he’d like to stay in our house next week and I didn’t stop licking his mouth and jumping up at his owner – yup I know how to be annoying!

That’s it for today, till next time …