Down the Allotment: March 2018

We’ve not been to the allotment since Christmas. So bad I know!! But things have been really busy with the business and our house sale so we’ve just not at the time to hang out down there as much as Grizzle would like. I thought it was time to pay our plot a visit yesterday which might have had something to do with the glorious spring sunshine and how warm it felt late afternoon 😉 Both Grizzle and I are not fond of the rain and prefer to hunker down at home in winter, but when the sun shines that is our time to shine: we love the sun!! And working down the allotment is our favourite pastime, something which is calming for me and mentally stimulating for him so naturally we had to see what had been going on yesterday when we finally got a slimmer of the summer to come.

I was half expecting the entire plot to be overgrown with weeds as we’ve had a few sunny days before now, and although there has been frost recently I didn’t think it was enough to keep things under control; so you can imagine my surprise to find the plot in a fabulous state.  I’m half thinking that our lovely allotment neighbours have been looking in on the space in our absence, they are great like that and always looking out for me. As you will see, the polytunnel is still standing (result! we made it through our first winter), the little fruit trees we planted last summer are alive, weeds are under control and my ground covering seems to be in place.

I’ve ordered some more pegs so that I can finish off laying the ground cover on the back of the plot to keep weeds under control as this year I won’t have time to actually grow anything or weed. The plan is to simply cover the entire plot with this weed control sheeting so that in the future I have a plot to come back to which isn’t overgrown with brambles and weeds. Perhaps I may grow some tomatoes, herbs and chilies in the polytunnel this year, but in tubs and containers – it all depends on how Grizzle’s dad is doing and how much time I’ll have to get down to the plot. The allotment is meant to be a calming space for me so I won’t allow myself to feel stressed by maintaining it, thus covering it all up until such a time as I can focus on it fully.

In the meantime, we’ll continue to visit our space when the weather is lovely as if nothing else it’s a beautiful spot to sit and watch the sun go down late afternoons and early evenings. No one is there that late in the day but the birds who are chirping loudly and settling down for the night. Allotments are hives of activity for animals and wild with beautiful and interesting smells – just perfect for a dog and my happy place.

I’ve included a couple pictures taken yesterday showing the allotment in its current state, and Grizzle’s adorable face full of joy at having been to his favourite ‘place of work’. I hope you enjoyed reading, till next time .. 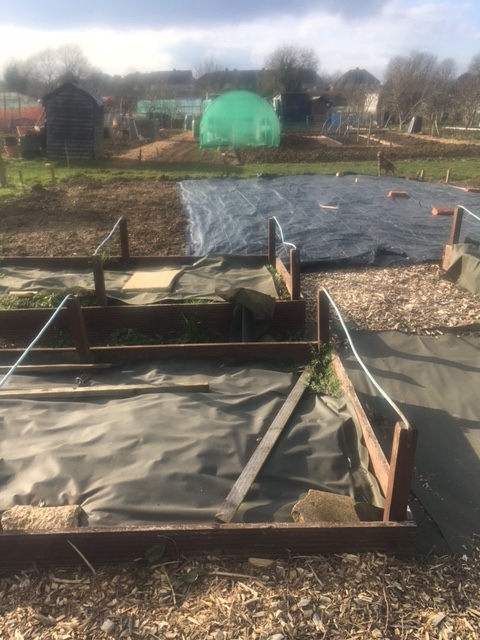 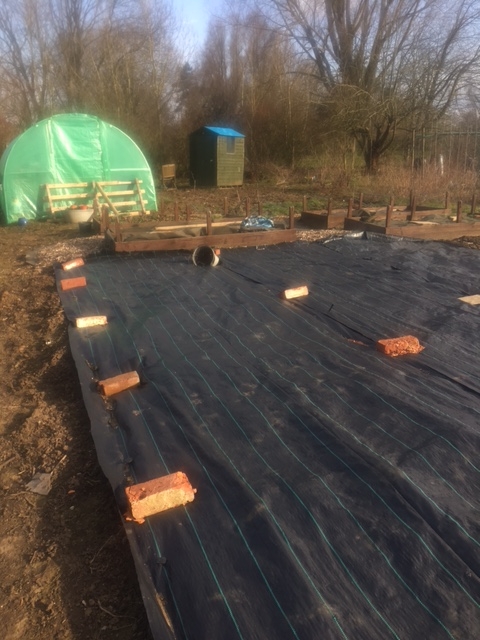 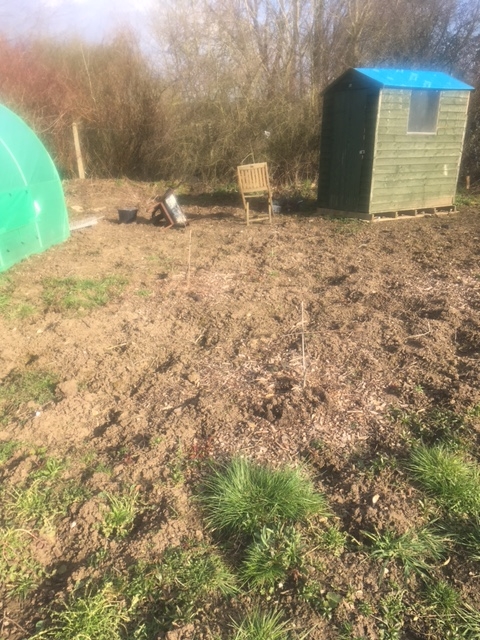 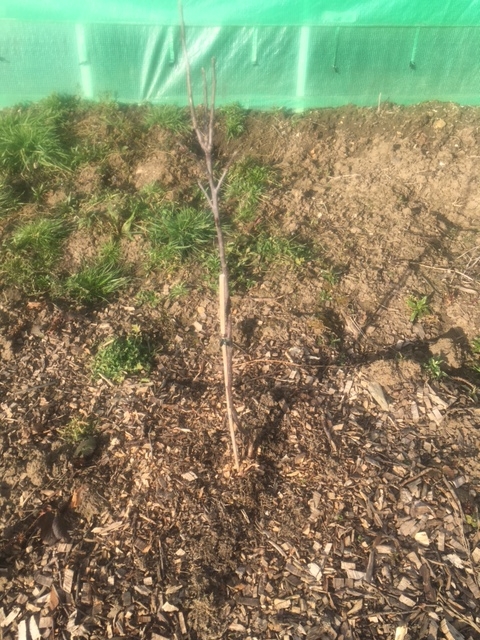 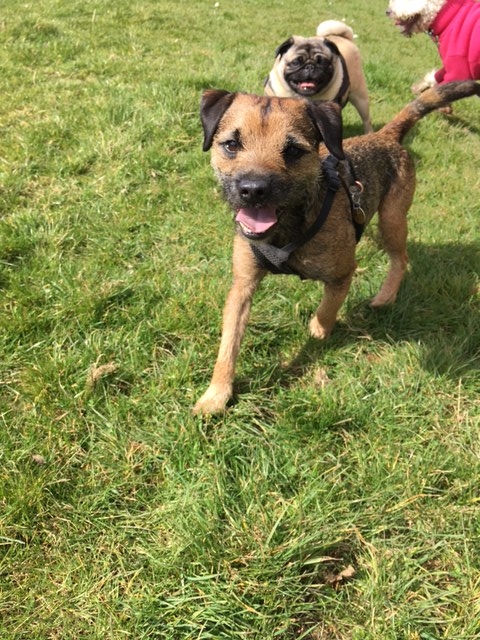 So much has happened this month on the allotment! We started with a blank canvas, save for a few pesky weeds which kept coming back, and that meant it was time to plan what we were going to put in our space.

Mum really wanted a polytunnel and last month it arrived but because of all the rain it did a lot of sitting in dads van while we worried about how we’d put it up (well I didn’t worry, I just watched my humans talk about it a lot). Anyways, dad’s van had to go back this month so we had a deadline to work towards and you know what they say about pressure .. !

Before you put a polytunnel up there are a few things you need to know.

Firstly, decide where you are going to put the tunnel and rake the area out well, removing all the deep weeds, lumps, rocks and anything else that’s going to make it unstable. Make sure you start with a flat surface and things will be much easier. I speak from experience as there was a lot of huffing and puffing as mum and dad tried to drag the constructed tunnel about to level it out. Foolish people.

After you’ve sorted the ground then it’s time to unpack your tunnel and position all the bits in sections on the ground so you can see the number labels. Bear in mind folks that the manufacturers may make a labeling mistake, so if it looks wrong it probably is (i.e. don’t get carried away by the numbers, use your noodle and work around it). Honestly, if dad wasn’t doing it with mum there’s no way it would be up by now, she’s not really what you’d call a ‘tool girl’ and he had to have a lot of patience to put up with her nonsense throughout the process. Don’t think for a minute I helped matters either. I wanted to dig, bark, roll around in the ground and generally cause mayhem!

It took about a week to get the frame up in its entirety. But once done we were able to cover the outside with tape, (this stops the sun making the bars too hot and burning through your plastic cover). Next came the cover and bright sparks chose a windy day to put it on, but what do you know … it actually got on within 15 minutes and happy days we had a tunnel!

The other guys on the allotment have been so nice to us and one of them gave us a shed and base while another guy built us 4 raised beds. So this has meant June was a busy month of changes down on the plot and we have been able to not only give the space some structure with all these new bits, but also plant out the first tomatoes, salad leaves and cabbages.

On the 14th of June we celebrated dad’s birthday and because he was given 5 fruit trees that was the next exciting thing to happen and just the other day I helped mum plant them in! The tree’s are miniature so should fit the space well. We’ve got 2x apple, 1x plum, 1x cherry and 1x pear. The little tree’s have been positioned outside of the ‘pet zone’ as I shouldn’t get my gnashers on the cherry’s, plums or apple seeds.

I’ll be honest, there’s a whole lot of chatting down at the allotment and coffee breaks happen every few hours. A man called Ken is in charge of these coffee breaks and I love him as he always gives me biscuits when I go to his shed. Everyone sits around and drinks cups of coffee laced with “medicine” (I think this is their code name for rum and whisky, shhh). Sometimes people will bring cakes but even if they don’t I always end up with a tasty cookie so these breaks suit me well. If it’s been raining I make sure to jump on people’s laps just to leave them with a tidy little muddy paw present. They pretend as if they like it and fuss me back, but mum tells dad she’s not sure I should go down with her anymore, hmmm what do you think?

That’s not all! We also had a huge delivery of poo turn up the other day. Horse poo!! I was in absolute heaven. Mum found an advert on Facebook where someone was selling a truck of manure for £40. Apparently this was a bargain as delivery was free. I had to stand back while the truck turned up and made the dump and this was hard because all I wanted to do was jump on top of the pile of poo and gobble it up. Yummers! 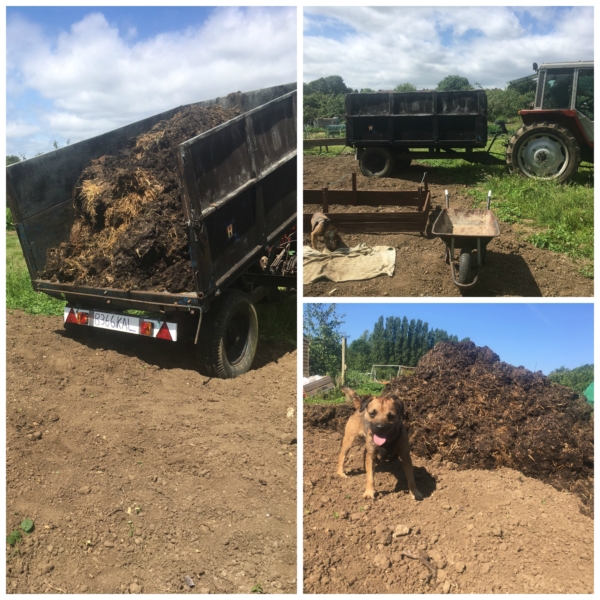 Since then we’ve had lots more work to do as we’ve got to get the manure into the 4 raised beds and then move the rest of it to the back of the polytunnel so we don’t get ourselves some poo thieves visiting (everyone wants some of our stock as getting manure delivered is difficult). I love working with mum as it means I also get to dig which is my most favourite thing to do in the world!

Dad’s been coming down to the allotment as well a few mornings this month, he fixes himself up a comfy chair and plays Find It with me. Instead of using treats he’s been hiding my ball around the plot and making me find it with my nose. I love this game nearly as much as I love digging and we do it for more than an hour at a time as I won’t give up.

Well that’s June in a nutshell everyone. Come back again next month to see what I get up to next! 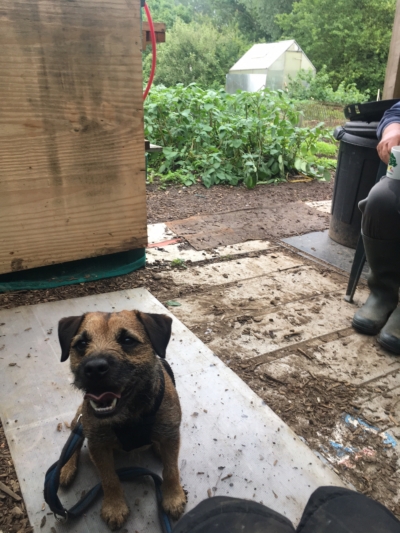 Waiting for a biscuit during a coffee break!